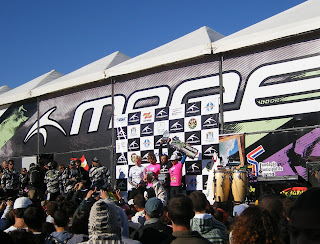 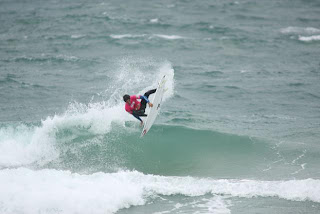 The young Brazilian, only 15-years of age, walked away with US$20,000 in prize money and 2,500 ASP WQS ratings points for the win, becoming the youngest surfer ever to win an ASP WQS event. With a heat score of 15.83 out of a possible 20, Medina proved the surfer of the event and deservedly took the title of Maresia Surf International.
In a beatiful sunny day with messy three-to-four foot conditions waves, the Brazilian goofy-footer was in amazing form, blasting some vertical maneuvers and big aerials on his way to victory. Medina officially announced his intentions when he logged a 7.50 to take early lead. Neco quickly answered back with a 5.50 and a 6.50 with solid backhand attack.
With five minutes to go, Medina arrived back in the lineup he found himself sitting directly in the path of a long left. Medina squared up and went vertically up the face to smash a huge re-entry, racing down the line and with two additional turns secure a high score of 8.33 points out of a possible 10 and leave Neco needing a 9.33 score to win.
With no waves coming, Neco was unable to found a high score, and Medina was crowned the 2009 Maresia Surf International Champion.